The Swedish Carolus Linnaeus is considered the creator of the classification of living beings or taxonomy. In his great work Systema naturae, which, with 13 editions, represented 35 years of work, in the 18th century developed a binomial nomenclature system that is still used today, based on the use of a first term, written in capital letters, identifies the Genus, and a second term corresponding to the specific name of the Species, written in lowercase letters. From the most specific to the generic, in a nested hierarchy, grouped species into Genus, Family, Order, Class, Philum, Kingdom and Domain (Later on, the need to detail the classification forced to establish intermediate categories.

Insects comprise the most diverse group of animals on Earth with approximately one million species described. And it is estimated that there are between 6 and 10 million species not yet described or classified. For example, there are approximately 5000 species of Odonata (dragonflies, damselflies), 20,000 of Orthoptera (grasshoppers, crickets), 120,000 of Lepidoptera (butterflies and moths), 160,000 of Diptera (flies, mosquitoes), 9800 of Dictyoptera (cockroaches) , termites, mantis), 1,900 Siphonaptera (fleas), 82,000 Hemiptera (chiggers, aphids, cicadas), 350,000 Coleoptera (beetles, ladybugs), and 153,000 species of Hymenoptera (bees, wasps, ants) .

But not all species have an economic impact on agriculture, either positive (for being natural enemies of pests or for acting as pollinators in crops) or negative (for causing economic damage to crops). Of the 32 taxonomic Orders of Insecta, only 6 affect  to agriculture as pests. And within these, approximately 5,000 species can be classified as harmful.

Coleoptera and Lepidoptera are the Orders that have the highest number of plague insect species.

Among the agricultural pests are also important Acari, or mites that, although they belong to the Arthropoda type, do not belong to the Insecta Class but to the Arachnida Class. For a long time they were considered an Order.

Its scientific name literally means 2 wings, because they have only two membranous wings and not four, as the vast majority of insects, and two posterior organs called halteres that are not use to fly but to maintain stability during flight. They are also characterized because the buccal apparatus (proboscis) is generally either of the sucking type or of the sting-sucking type. Some 160,000 dipteroa species have been described, classified into 150-160 families. Commonly they are called flies, mosquitoes, etc.

Some species are pests and others are predators of other pests. 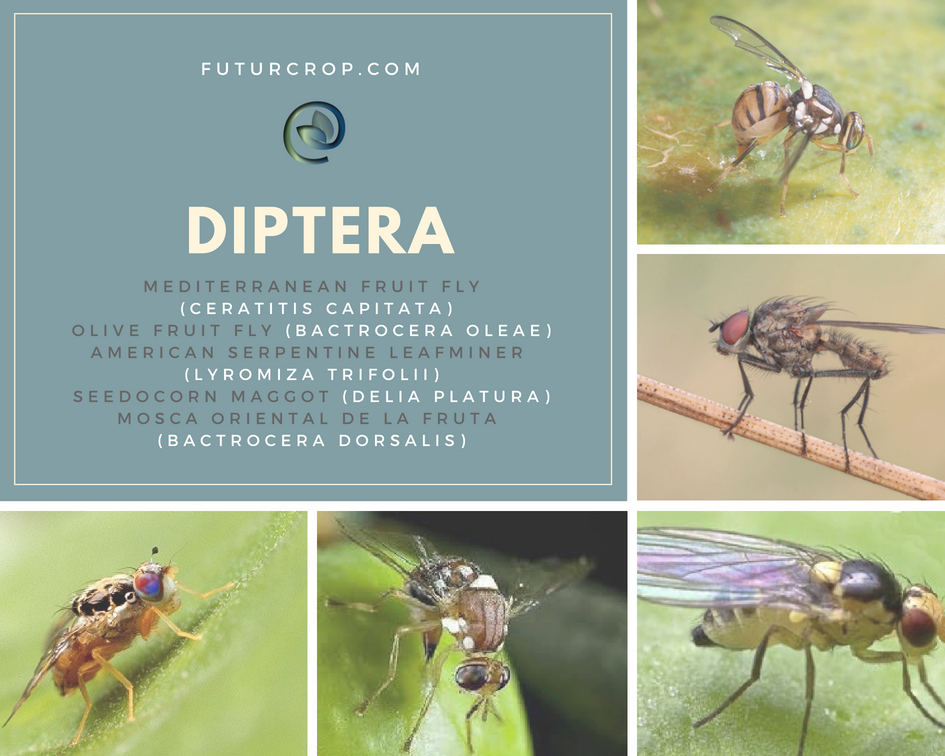 Its scientific name refers to the scales of its wings, and are commonly known as moths, and butterflies. Most species are nocturnal. The mouthparts of adults, known as a siphon, are adapted to suck the nectar. For this reason, many species fulfill the role of plant pollinators, and are beneficial for crops. But its larvae, known as caterpillars, feed on flowers, fruits, stems and even roots, and are important pests for agriculture. Some species are capable of generating tunnels, mining the surfaces they feed on.

The lepidoptera are the second Order with the most species within the insecta class. More than 165,000 species, which are classified into 127 families and 46 superfamilies. 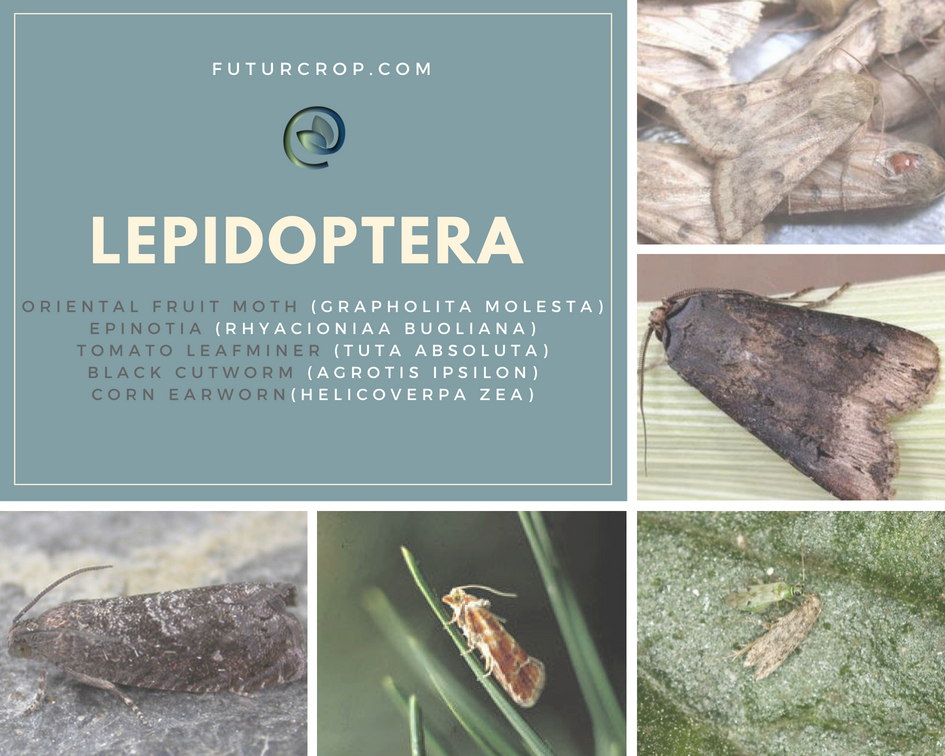 Its scientific name refers to the hardness of its front wings. They have the common name of beetles, ladybug ladybirds, etc. It is the largest order of the Insecta class, so it is normal that the different species can follow different behavior patterns. For example, some species feed on vegetation, and are pests, but others are insect predators and beneficial for agriculture.

They have 2 pairs of wings. The front ones are hard, fit in a straight line on the abdomen and that cover their other posterior and membranous wings. Their buccal apparatus is adapted for chewing. 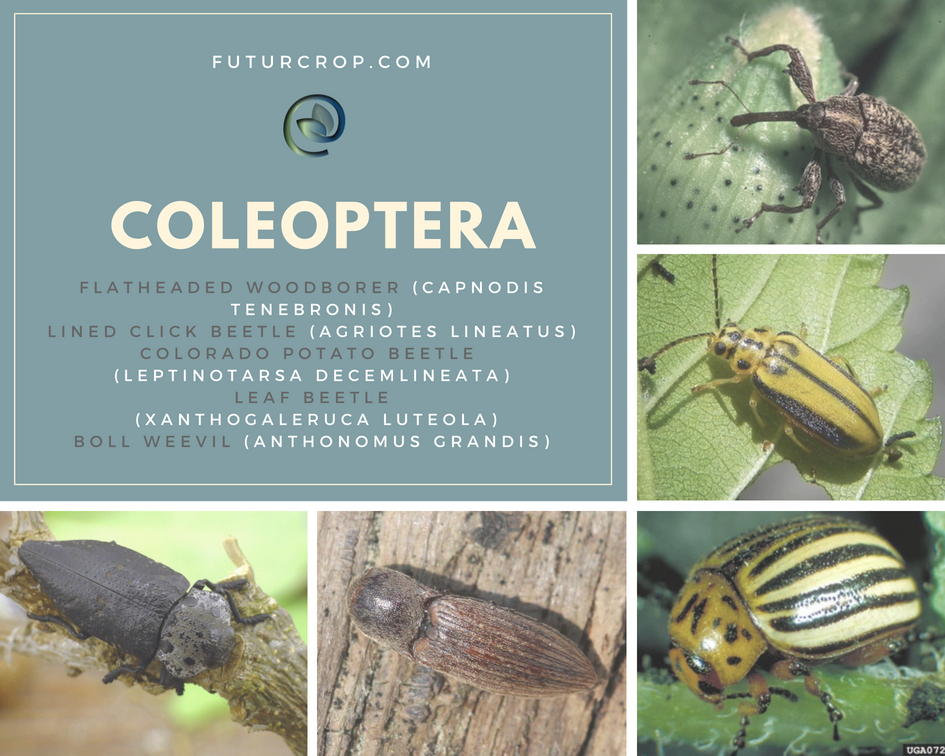 Its scientific name means that the forewings are divided, and have a hardened half and a another membranous half. When resting, the wings fold flat on the abdomen, with the tips overlapped. During almost the entire 20th century, the hemiptera included heteroptera and homoptera. Currently some entomologists consider them different orders. The name homoptera refers to the wings of insects have a uniform texture. The Order includes insects commonly called mealybugs, whiteflies, etc.

The Hemiptera order (considering heteroptera and homoptera) comprises between 50,000 and 84,500 known species

Its mouth have a sucking structure, and they use it to suck out sap or animal fluids like blood. Among the best known hemiptera are aphids, cicadas and bed bugs.

Many species of hemiptera have agricultural importance because they are phytophagous or predator. For agriculture, within the order hemipterans, highlights the family of aphids (Aphididae). They have great economic relevance for agriculture because they feed on plants and some are vectors of viruses. 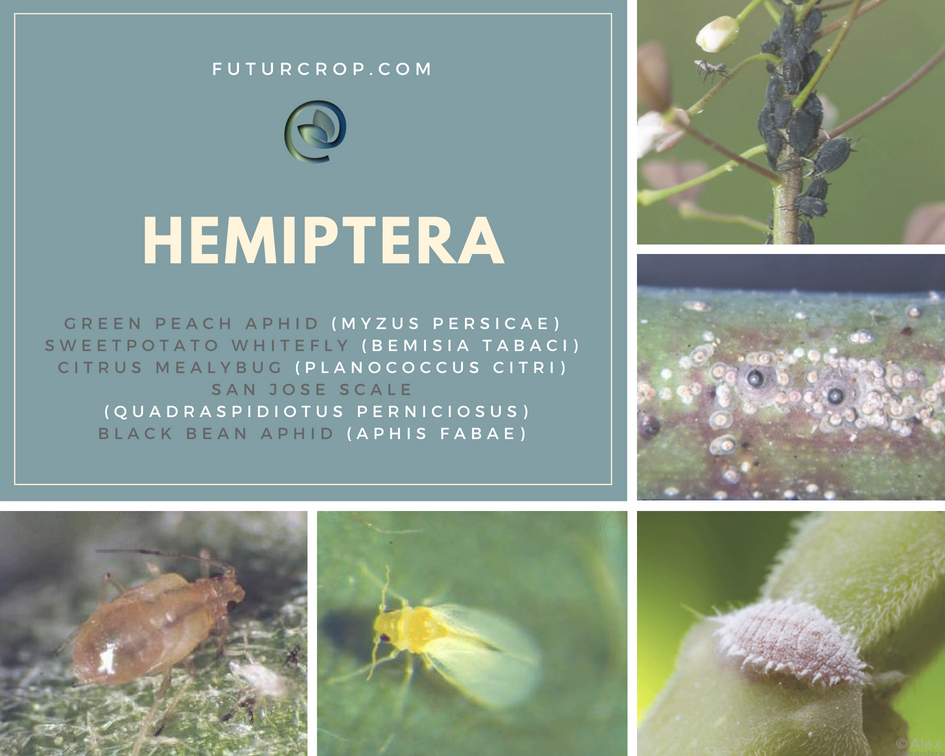 Its scientific name refers to the marginal fringe on its four wings, which increase its  flying surface when the insect is in flight. Although adults can also be winged or apterous. They are commonly called thrips. They are small insects with an elongated body, brown or black.

The buccal apparatus is a sting sucker type, with different adaptations depending on its diet, whether phytophagous, carnivorous, ectoparasite or mycoplasma. Although most species feed on the sap of plants, they can also feed on pollen or they can even be occasional predators, sucking the fluids of aphids and mites.

Some 5,600 species are known, of which about 550 are pests of cultivated plants, which fruits they discolor or produce damages that make them less tradable. They can also act as vectors for more than 20 viruses, some of them as harmful as tomato spotted wilt virus 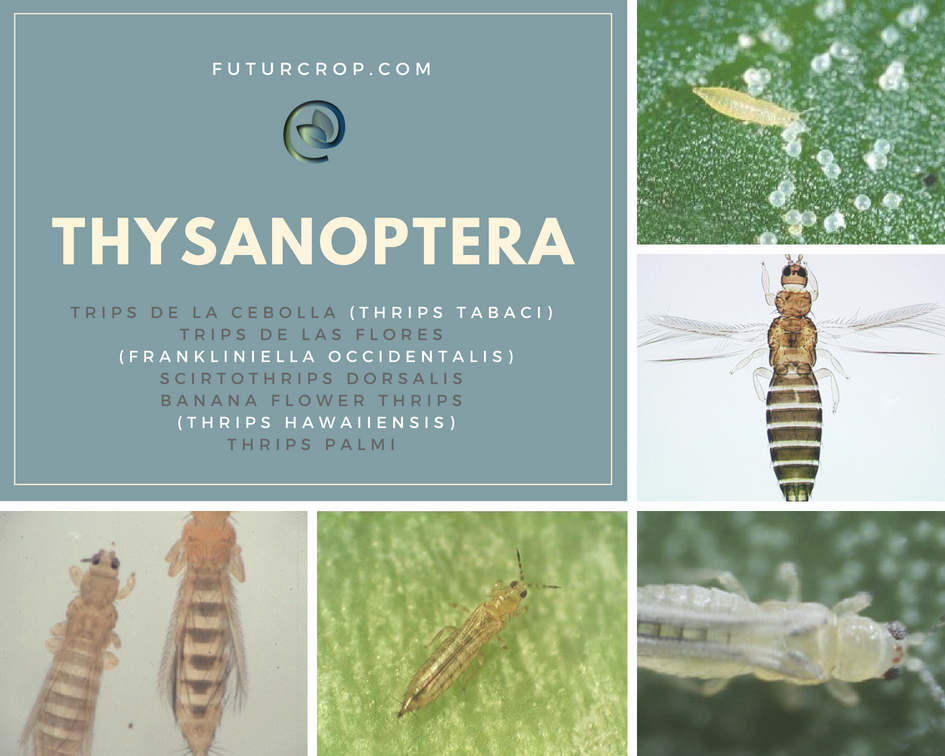 Its scientific name refers to its straight and upright wings, and refers to insects known as grasshoppers, locusts, crickets, cicadas, etc. The taxonomic order includes some 19,000 species, mostly of tropical origin, but many already distributed throughout the planet.

Morphologically they are characterized by having a chewing mouth, a third pair of legs specialized for jumping, and two pairs of wings (although they may be absent in some species). In spite of feeding mainly on plant tissues, in general they are not of great economic importance. Except for the few species, commonly called locust, that have the ability to swarm and migrate in large numbers. 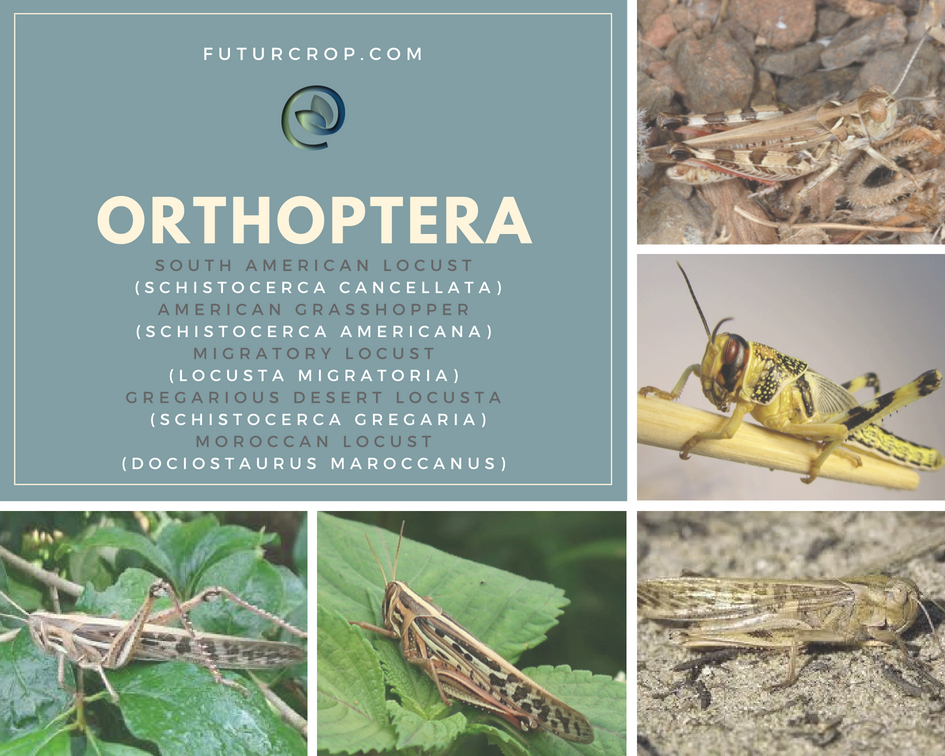 Its scientific name refers to its tiny size. They are a subclass of arachnids, although for a long time they were considered an specific order. Because of the damage they cause, they are one of the species with the greatest economic impact on crops.

There are about 50,000 species, which are classified into 2 types: eriophids and tetraníquidos. The first are pests that, although they do not cause great direct damage to the plants, the saliva that they inject when feeding can carry viruses. The second ones are the most characteristic mites, and the pests of order that can cause more direct damage. They are suckers, and as a consequence of their feeding system it is usual to observe bites in the plants, in most cases of yellowish color. Of the tetraníquidos, we highlight the red spider mite (Tetranychus urticae), because it attacks more than 150 agricultural species, and the citrus red mite (Panonychus ulmi), because it is one of the mites that most attacks the fruit trees.

Some species of mites can be predators or parasites of other insect pests. 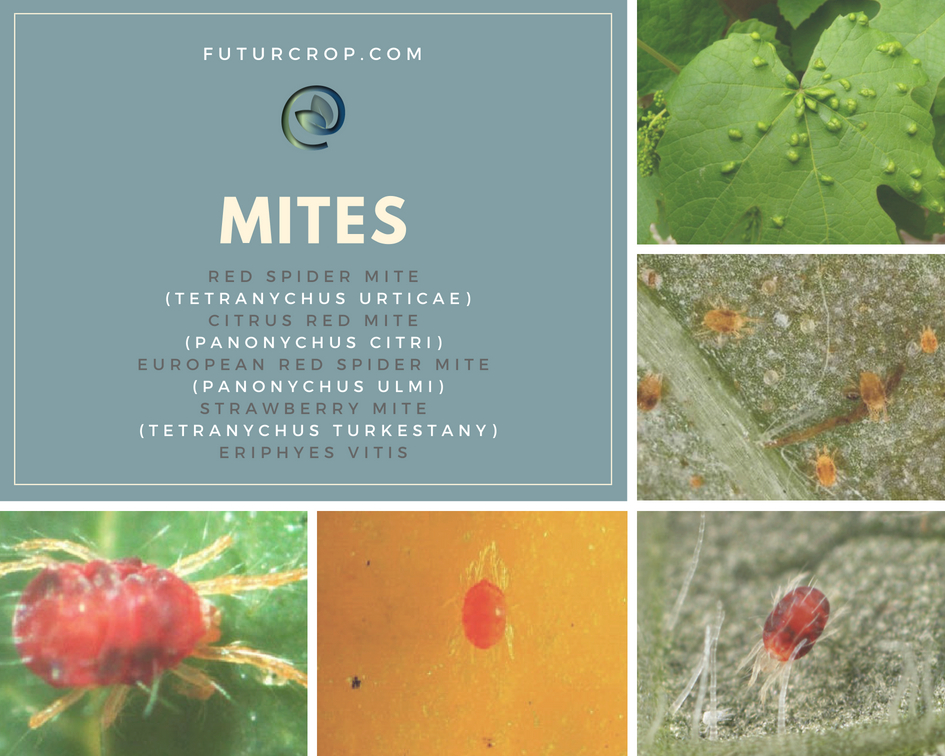